Christian Rapper Lecrae Moore Is Changing The World Through His Music: But Is He Changing The Gospel With It?

Okay, let’s get this out of the way first. Yes, I am the Pastor who confronted Meek Mill over his religious lyrics in his song, “Amen.” And for those of you who heard that interview, you fall into one of two camps. You either think I was over religious and wrong in my approach, or you believe I was bold in defending the faith. Believe me, I’ve heard both sides. But regardless of your belief about that debate, it should be known that I am, and will always be a fan of Hip Hop, but a bigger fan of God.

When I rededicated my life to Jesus at the age of 23, I was excited to be exposed to Christian Hip Hop. I never knew that there was music that could merge my love of rap with my love for God. My first real taste was those Holy Hip Hop Volumes. Remember those? You had to press skip like fifty times to find a good song! But upon hearing some very good artists, I believed and accepted the fact that rap was not of the devil and that it could be glorifying to God.

I was soon exposed to Lecrae and the 116 Clique. Simply put, I fell in love with their music. Growing up in Georgia gave me an affection for southern bass and beats, so when I heard the chopped and screwed “Jesus Music” I immediately hopped in my 1998 Camaro with the 15 inch subwoofer and put the song on repeat. I was unashamed to the core. It felt good that I could be holy while still being down with my culture.

At that time, Lecrae was a voice in the wilderness. Sure there had been other Christian rappers, but there was something about Lecrae’s clear delivery, reformed theology, great music production, and community feel that made me buy his music. Upon hearing Lecrae, I started feeling all of the rest of Reach Record’s artists: Trip Lee, Tedashii, and Sho Baraka. (I still believe Sho’s album “Turn My Life Up” is the best Reach Records album ever.) I first downloaded the free songs before divulging hundreds of dollars in purchasing their music. I bought EVERYTHING they came out with. (Okay, everything except Lecrae’s first album.) But Reach Records was my go to label. In the meantime I did find affection for some other great CHH artists. Viktory from Chicago, Sevin from Sacramento, and even Rhema Soul tickled my fancy. But when it came to new releases, Reach always had my heart.

In 2009 I enrolled in Westminster Seminary to pursue my Masters of Divinity Degree. I felt called to full-time ministry and wanted to be equipped the best way possible to prepare. The next year I felt called to plant a church in North Philly. And upon the start of the church and subsequent growth, I sought to use Christian Hip Hop and Lecrae’s music as a bridge to reach the mostly urban community. I would play it out loud from the churches speakers and pass out CD’s to people passing by. I would even dabble into Christian rap recording a gospel E.P. with rapper Cassidy in the hopes to communicate the Gospel. For me, Lecrae set an example of what it meant to be cool, saved, and unashamed.

Somewhere in between 2011-2013 things began to change. I was less concerned with CHH as I was trying to finish this gruesome 115 credit Masters Degree, pastor a church, run GGIS Publishing, and keep my soul clean. (I did make time to write a book on Lil’ Wayne and have the infamous debate with my city’s favorite rapper.) But it was around this time that I began to hear things about Reach and Lecrae that were weird. For one, Tedashii’s album Blacklight album barely mentions the name Jesus. Don’t quote me on this, but someone told me he says the name Jesus less than 3 times. Hmm. Was that intentional? And then Sho Baraka left Reach to do… secular/Christian music? Hmm. It’s cool, I understand. He’s still a great artist but what’s up? And then, Lecrae comes out with Church Clothes and Gravity. Church Clothes, let me admit, I enjoyed some of it, but I’m always uncomfortable when Christians do public critiques of the church through music. (If the church is Jesus wife, would you really talk about her in public?) This is what he seemed to do on the lead single. I did buy the album Gravity for my older sister. After seeing she barely listened to it I decided to give it a listen for myself. Could this be a concept album, I thought? Maybe so, because what I was hearing was not the content of what I heard before. Well, I thought, its cool. Lecrae is branching out, trying new things. No problem with that right? He’s an artist. Even if he wants to do a non-gospel song, “Whip It” with Paul Wall (a rapper associated with the rap group 666 Mafia) maybe its evangelism. I gave Crae the benefit of the doubt. He was doing something nobody has ever done: make CHH relevant. You don’t have to mention Jesus in every song you do…right?

Unlike many fans who have jumped ship from the Lecrae bandwagon (and I know a lot of them) I remain supportive of Lecrae. I recently listed him as one of the top 5 rappers of all time on SOHH.com.  But please hear these words. Supporting him personally does not mean you cannot critique his methodology. Lecrae, in his philosophy and music, has espoused himself the doctrine of Neocalvinism. I don’t want to go into an extensive detailed history of Neocalvinistic Theology. (If you want that, go to a 70k dollar seminary like Westminster.) But in short, let me quote Joe Carter of the Gospel Coalition for a brief explanation:

Although neo-Calvinists (aka New Calvinists) and neocalvinists (aka Kuyperians) tend to share a broad range of theological positions, the differences often arise in their emphases and language. While New Calvinists tend to focus on renewal of the local church and use terms associated with traditional Calvinism, the Kuyperians (neocalvinists) generally aim at cultural renewal and use jargon whose connotations are specific to the movement.

And also from the Banner of Truth:

“W. Aalders, a scholar of renown in the Netherlands who has studied this issue thoroughly does not hesitate to refer to Kuyper and the whole Neo-Calvinist movement as ‘The Great Derailment’. In his view, Kuyper with his lop-sided emphasis on culture and social involvement has contributed greatly to what he calls the externalisation of the doctrines of grace, especially justification and regeneration.”1 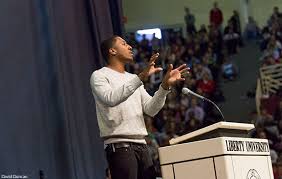 What Lecrae is doing falls under the realm of neocalvinism. Seeking to positively impact the culture without necessary preaching to it through his art. He is now an artist who seeks to influence culture and the world through his art. There is nothing wrong with this. Many Christian artists have done this in the past. But neocalvinism can be extremely dangerous if not balanced with a purely biblical view that the world is perishing. The world and culture will not be renovated, it will annihilated. God will do this so that it can be rebirthed as new. As Paul states, our outward man is perishing. So for Lecrae, or any other Christian who to attempts to redeem the culture by positive influence, they are like a maitre’ d polishing brass on a sinking ship.

In my new book, “Lecrae 3:16: The Gospel According to Lecrae” I write a threefold treatise. First I show the inspirational early life story of Lecrae Moore, growing up in Texas, his near-death accident and more. I then talk about how his music gave hope to millions of believers around the world. And finally, I address from a theological perspective, his methodology as it relates to music. The book will contains dozens of interviews from Christian rappers, fans, and pastors to discuss these topics and more. I hope all readers will be moved by how God has worked in Lecrae’s life and used him to be a light in a very dark industry. But at the same time, the book will also help Christians to remain cautious in understanding how both the culture and the gospel intersect.

Only Jesus saves. But amazingly, God chooses to use men to proclaim that message. Both the content of the message and the delivery of it are equally important to God. In the book, the reader will discover how God has used that message in Lecrae’s life while also helping the reader to see the best way He can use it in theirs.

Jomo Johnson is the founder of Philly Open Air Church and Director of GGIS Publishing and Media. He has authored over 15 books and has been a leading voice on the current trends of Hip Hop Music. He has worked with artists such as Cassidy, debated rapper Meek Mill, and written the top-selling biography on Rapper Lil’ Wayne. Johnson has a B.A. in Biblical Studies from Beacon University and an M.Div from Westminster Seminary in Philadelphia. (IP) When not writing, Johnson enjoys time with his family in Atlanta, GA.

Your shopping cart is empty
Visit the shop

Our Friends and Followers

GGIS Publishing is now accepting manuscripts for review from authors. GGIS 's goal is to take your book to a local, national, and global audience.

GGIS Publishing for Ministries and Non-Profits

Let GGIS assist your Church, Ministry, or Non-Profit in the creating, distributing, and publishing of your organizations mission or message.

"Book Your Call" Instant Publishing allows your to speak your book into existence. Click above to find out more.